A study published in the prestigious journal GUT has unraveled the important components of the fibroinflammatory microenvironment of pancreatic cancer, the fourth leading cause of cancer-related death worldwide, identifying lysyl oxidase-like protein 2 (LOXL2) as a key factor in the metastasis of this high-mortality tumor.

This work has been led by Drs. Bruno Sainz Anding and Amparo Cano and carried out by the Cancer Stem Cells and Fibroinflammatory Microenvironment Group of the Instituto de Investigaciones Biomédicas “Alberto Sols” (IIBm) CSIC-UAM and the Instituto Ramón y Cajal de Investigación Sanitaria (IRYCIS). This study has been supported by the Fero Foundation, the ISCIII, the Spanish Association Against Cancer (AECC) and the group coordinated by Dr. Alfredo Carrato within the gastrointestinal tumor program of CIBERONC, in addition to an essential collaboration with the CIBERONC breast cancer program group led by Dra. Gema Moreno-Bueno, from the UAM and the MD Anderson International Foundation.

The researchers have tried to better understand the role of the tumor microenvironment in promoting metastasis in pancreatic cancer. A hallmark of this tumor type is its collagen-rich extracellular matrix and fibrotic stroma. Several proteins secreted from tumor cells into this microenvironment play an essential role in the creation of its organized stroma. These proteins include those of the lysyl oxidase family of proteins, in particular LOXL2, which is responsible for collagen and elastin binding to the extracellular matrix and, as observed in other tumor types, is involved in eliciting certain biochemical, physical and mechanical effects capable of modulating tumor progression. In the current study, led by Marta Alonso-Nocelo and Laura Ruiz-Cañas (co-first authors), several genetically modified mouse models of pancreatic cancer were used to demonstrate in vivo, for the first time, that the loss of Loxl2 significantly reduces tumor metastasis and prolongs overall survival, whereas the opposite was observed when Loxl2 was overexpressed in mice. Furthermore, the group has demonstrated that tumor-associated macrophages are actively involved in this process and are able to promote Loxl2 expression through the secreted protein oncostatin M (OSM). Importantly, this study shows in a pioneering way that Loxl2 expression plays an important role in PDAC metastasis, and that compounds blocking Loxl2 in combination with inhibitors of TAMs or OSM-mediated signaling may represent a new therapeutic approach to reduce the metastatic potential of PDAC tumor cells.

“Understanding the fibroinflammatory microenvironment of pancreatic cancer is essential for designing new therapies for patients suffering from this devastating cancer” says Dr. Bruno Sainz Anding, and Drs. Moreno-Bueno and Cano agree, stressing that “the correct molecular characterization of pancreatic cancer will allow, in the future, to correctly classify patients and advance in the design of personalized therapies”.

The project was supported by the Fero Foundation and projects from the Spanish Association Against Cancer (AECC). 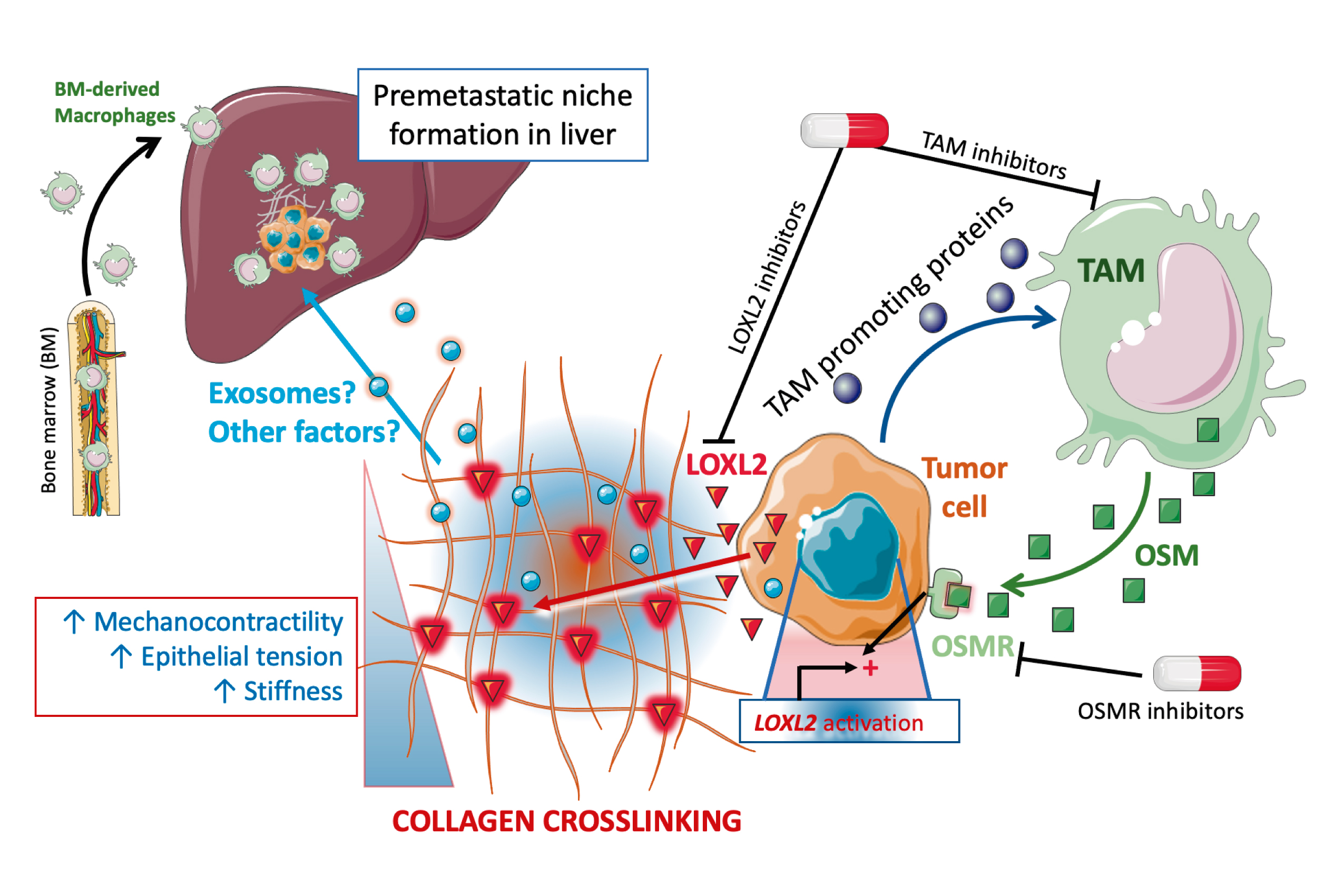